If there was one horse this weekend that laid serious claims to both the Cheltenham Gold Cup and the Grand National 2018, it was Definitly Red. Following his hard-fought eight-length success at Cheltenham’s only Gold Cup trial on Saturday, he now has every chance of not just running, but seriously contending for both.

With odds slashed since the win, Definitly Red is now as short as 16/1 with Betfair to win the Gold Cup – those odds are Non Runner No Bet already so well worth a punt if you fancy his chances. Trainer Brian Ellison appears to have his sights fixed on the Gold Cup and believes the market leader, the Nicky Henderson-trained Might Bite, is easy to oppose.

“The Gold Cup is quite open,” said the trainer. “Might Bite is favourite but I don’t think the form of the King George looks that strong. Red has every chance and could be overpriced.

“I thought it was a very impressive performance – he jumped brilliantly and has proved how good a horse he is,” said Ellison.

“He ran a great race at Aintree last month and is in the form of his life. The likely faster ground at Cheltenham come March will not bother him as he has won on good to soft. If he can finish in the first three we’d be delighted.”

And while Cheltenham may seem a very attractive prospect for connections, trainer Brian Ellison is spoilt for choice with the Grand National 2018 another interesting prospect.

In terms of Grand National odds, Definitly Red is 16/1 ante post, with Betfair, but a pragmatic Ellison is taking it one race at a time stating “We’ll get the Gold Cup out of the way first but he’ll be entered in the National and we wouldn’t be afraid of doing both as there are four weeks between Cheltenham and Aintree this year.

“We’ll have to see what type of weight he gets for the National but there’s also the possibility he could go for the Bowl at Aintree.”

With the official deadline for entries today, and the potential runners due to be announced tomorrow, Ellison will have to wait another couple of weeks before finding out if Definitly Red’s epic win at Cheltenham this weekend has seriously hampered his chances at another shot at the Grand National, when the weights are announced.

He did run in the 2017 renewal but was pulled up by jockey Danny Cook at Valentine’s on the first circuit. Can he make a better impression in 2018? He’ll have some tough competition with the likes of Blaklion also on top form! 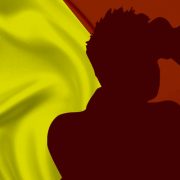 Definitly Red Out Of Grand National 2018