Fifth in the 2017 Grand National, it would seem that connections of Gas Line Boy had already decided to give him another crack at the Aintree fences by giving him a run in the Becher Chase which takes place on December 9th.

He has already had one trip to Aintree this season but fell three out when in the lead in the In Play Betting At 188Bet Veterans’ Handicap Chase which took place on October 29th.

He is said to be fine after the mishap and trainer Ian Williams said: “He’s come out of his race well.

“It was a mishap and most unfortunate, but he will probably go to the Becher Chase now.

“The only positive to what happened last time is that he won’t have a penalty he would have had to carry in the Becher.

“He loved the National fences last year but didn’t look to stay the trip. He travelled really well to the second-last.”

And while Gas Line Boy may have stumbled, it was The Romford Pele who made the most of it with a winning debut for his new stable under jockey Adrian Heskin.

George said: “Rebecca Curtis has done a very good job with him and he came to me during the summer.

“He’s done it well. He made a bad mistake early on and Adrian just nursed him round from there and got his confidence back.

“We’re probably a bit lucky, with the other horse falling, but we all have those days.”

He added: “If he’d disappointed again today we were going to switch him back to hurdles, but that’s ‘decision made’ now – he’s a chaser.

“I don’t really have any plans for him, I just wanted to get through today.”

Will we see either of them lining up for the 2018 Grand National next April? No doubt connections will be watching the rest of the season unfold before making any concrete decisions but the Becher Chase will be one of the most telling races in terms of who can cut it over the notoriously difficult national fences. 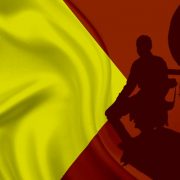 Mullins Puts Total Recall On Hold Until After Weights