From a 2019 Grand National perspective, the Ultima Handicap Chase at the Cheltenham Festival was always going to be very telling. A race that attracted over 100 entries, the Ultima was eventually whittled down to just 24. Thirteen of those are also entered into the National.

Having been talked up A LOT by connections, Give Me A Copper attracted a lot of money. He was top of current racing tips for a lot of horse racing pundits. Alongside Up For Review, he went off on relatively short odds of 9/1 with most bookmakers. He made steady progress and settled in the middle of the field. However, as the pace picked up he lacked the stamina needed to go the 3m1f and started to tire. Then he fell at the last.

Trainer Paul Nicholls has reported that Give Me A Copper is doing fine but has now withdrawn him from Grand National contention. Instead, he will be aimed at the Scottish National where hopefully the ground will be more suitable.

Minella Rocca is another that generated a lot of buzz. Reported to be in good form ahead of the race, he was priced at 14/1. But he never got going and was the first to be pulled up in the race after the 8th fence. That was only about halfway around the course.

Trainer Jonjo O’Neill will have a lot of work ahead of him before April 6th if he wants Minella Rocco to go the distance.

The best performing potential Grand National runners were Vintage Clouds and Lake View Lad. Both greys are owned by Trevor Hemmings, who has already won the Aintree showpiece three times before.

Despite leading from three out, Vintage Clouds, trained by Sue Smith, was soon pipped by Beware The Bear but rallied on well for a worthy second place. His Grand National odds have now plummetted to 12/1 from 25/1.

While Vintage Clouds will have to wait to secure his place this year, Lake View Lad has already confirmed his spot and sits at number 17. A terrific runner, he has won or placed from 12 chase starts. It was questionable as to whether he could take a step up in trip but his run in the Ultima soon settled that.

Little talked about Magic Of Light, who also has a spot in the Grand National top 40, finished in a solid seventh place. Trained by Jessica Harrington, he did have to be pushed along but couldn’t catch up and instead maintained his pace to the end of the race.

Up For Review from Willie Mullins finished 8th. Noble Endeavor for Gordon Elliott was in 10th place. Singlefarmpayment for trainer Tom George was the last of the finishers in 13th spot. 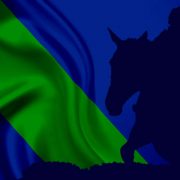 Magic Of Light Shining Brightly Ahead Of Grand National

One For Arthur Goes Straight To the 2019 Grand National