The recent Rowland Meyrick third, Lake View Lad, will have another crack at this year’s Grand National according to his Fife-based trainer, Nick Alexander.

The Trevor Hemmings-owned grey was pulled up in the 2019 renewal of the race but excuses can be made for a below-par performance that day.

After the Wetherby race Alexander said: “I suspect we might not run him until the National weights are out.

“He’s dropped another 1lb (to 154) for that. We might wait until February to run him now – because he has a hard old race the other day.

“He finished strongly, looked like he stayed very well, so the dream is still alive.”

The Grand National is now on the cards for the Christian Williams-trained Potters Corner after he was successful in the Welsh version over the recent Christmas period.

The nine-year-old beat a 17-strong field at Chepstow when coming home a length-and-three-quarters winner, bringing much joy to his owners that included the Wales rugby union star, Jonathan Davies.

Glamorgan based Williams said it was all systems go now towards a run in the Aintree showpiece at the start of April: “I would say we will enter him in the Grand National and that would be the main aim as you don’t get too many options now.

“We will target that and hope that the ground is on the soft side. He looks a different horse on soft ground.

“It’s all a bit manic and we will have a think now. I might enter him up in some good races off level weights in soft ground – maybe Ireland.

“I’ve never had a runner in the National before, so that will be great. He has got good tactical speed and a touch of class and he stays very well. They try and make it on the soft side there as well so he will definitely have an entry there.”

Also a winner of the Midlands National last season, Potters Corner is now a general 33/1 chance for the big one.

“We’re busy planning for the National,” is what trainer Brian Ellison told the Yorkshire Post this week in relation to his star chaser, Definitly Red.

The gutsy 11-year-old lumped 11st 10lb over the famous Aintree fences to finish fourth in December’s running of the Becher Chase and will take his chance again in the much longer Merseyside marathon this coming April.

Ruling out a third tilt at the Cheltenham Gold Cup, Definitly Red who is owned by Phil and Julie Martin is looking at “maybe two” runs before the National itself.

He was travelling well in the 2017 version of the race before his saddled slipped and Danny Cook was forced to pull him up.

Gold Cup quality horses tend to perform pretty well in the Grand National and Definitly Red’s connections will be looking for a well-deserved change of luck this time around.

Veteran performer Regal Encore will head back to Ascot next month before another trip to Aintree for his third run in the Grand National.

Currently, on ante-post odds of around 50/1, the 12-year-old won the valuable Silver Cup last time out which was his first victory since February 2018, that win was also at Ascot.

His trainer Anthony Honeyball said: “There’s a chase at Ascot in February that he’s run in the past two years, winning it once and finishing third last year, and he’ll go back for it again as he’s 6lb lower this time.

“Hopefully if all goes well there it will be Aintree again after that.

“Hopefully he’ll head to the National off around the 146 he’s currently on.”

Definitly Red Out Of Grand National 2018 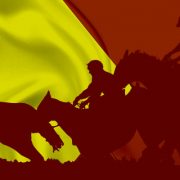 A Brief History Of The Grand National
Scroll to top