Anybody who watches the Grand National 2020 betting market closely will have noticed that Native River moved from 20/1 to 16/1 over the weekend. That comes from a dominant win in the Denman Chase at Newbury on Saturday. Ridden by Jonjo O’Neill Jnr, it was his third win in the race and his second win of the season. So will we finally see him take to the Aintree fences on April 4th 2020?

Everything at the moment points to a run in the Cheltenham Gold Cup next month. It will be his fourth consecutive run in the race having placed third in 2017, won it in 2018 and placed 4th in 2019. Even with this vast experience, he is no more than a lively outsider for the race. Because although he will relish the staying test around Cheltenham, he is likely to struggle when the top-quality runners come to the fore.

But what happens after the race for him? Is this the time to put him in the 2020 Grand National? After all, at 10 years old, this is likely to be his best chance to run in the Aintree showpiece.

If you look at the form that Native River has shown over the past few years, he has risen towards the top of the staying chasers rankings. He loves a test, the tougher it is, the better he is. And that is why many people have wanted to see him run in the Grand National for the past couple of years.

However, for the past three years, he has been a solid Gold Cup horse with legitimate claims to the title. And rightly so, trainer Colin Tizzard got him spot-on for the Gold Cup with no plans for anything else after Cheltenham. That is where his season ends.

But is this the right time to make those plans, and will a good run in the Gold Cup turn out to be a great Grand National trial?

Native River has bags of stamina and a real engine that would surely see him home over the Grand National distance, which is a mile further than the Gold Cup. He also won the Welsh National in 2016 over 3m5f. He’s as tough as they come and when the going gets tough it is horses like Native River that come to the fore. You only have to look back at his win in the Gold Cup to see that, it was a slog on the day and only the toughest survived.

Something else he has is a bit of class. He loves to go along in front and keep finding more. You could picture him doing that in a Grand National and if he was out in front all alone, it would take a very good horse to get by him and beat him.

Whether the Tizzard’s put him in the Grand National or not is something we will have to wait and find out.

He is definitely going to Cheltenham with his owner saying: “All systems go for the Gold Cup. Native River has got as good a chance as any.

“There are younger horses about but I think he’s as good as he ever was, so I think we’ve a very good chance.

“A better chance than many of those shorter than him in the betting.”

But after that will he go to Aintree for the Grand National? He has an entry so the door is open and sometimes you have to roll the dice. This could be the ideal time to do it with Native River.

What We Learned From The 2019 Becher Chase

One For Arthur Back From Injury 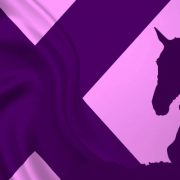 Pinstickers’ Guide To The 2021 Grand National